The Contenders Emmys presented by Deadline

Hello Milo fans! Yesterday, Milo and his beautiful This Is Us co-star, Mandy Moore talked with Nellie Andreeva about This Is Us. I have added high quality photos of Milo during the green room, presentation panel, and some gorgeous shots in the photo studio to the gallery! Enjoy! 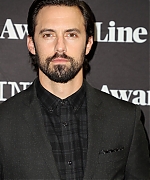 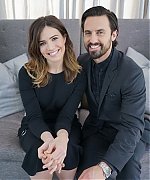 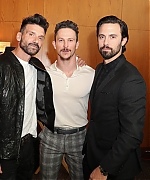 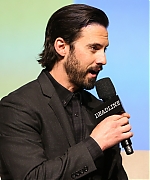 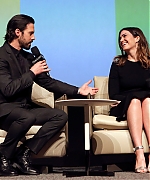 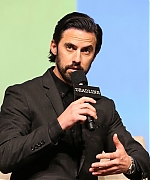 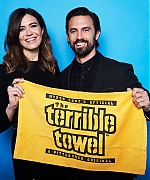 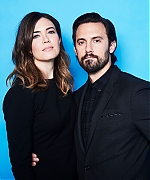 DEADLINE – Stars Milo Ventimiglia and Mandy Moore were among the This Is Us panelists Sunday at Deadline’s The Contenders Emmys event. The series focuses on three adult siblings and their parents, partly in flashbacks, jumping from character to character and between decades. From creator Dan Fogelman, breakout freshman series also stars Sterling K. Brown, Chrissy Metz and Justin Hartley and got an early renewal, picked up for a second and third season in January.

Of course, a major part of making a show that spans many years using the same actors is the makeup. With the help of 12 prosthetic appliances, Moore, playing mom Rebecca Pearson, convincingly ages over a 40-year period.

“It was very important to have the makeup look realistic,” Head of Makeup Zoe Hay said during the panel. “You know, she’s a mom at home, she’s not going to look like a beauty ad in the ’80s.”

But that level of preparation can lead to grueling periods in the chair. “I like to help out with the hairdryer,” Moore said. “Otherwise I’m just sitting there for three to five hours.”

For Ventimiglia, as Rebecca’s husband Jack, facial hair was key to portraying different eras. “With Milo, we referred to beard-gate,” Hay joked. “We had a lot of dialogue about how we would transition him for each period. … We haven’t tried a trucker mustache yet!”

“It’s hard to find the materials these days to go back to the ’70s,” production designer Gary Frutkoff said. “You’ll find a high-end couch or chair, but Dan (Fogelman) from the beginning wanted a very blue-collar look to this family. … We’re always scouring Craigslist and prop houses.”

Frutkoff also said shooting in L.A. had its drawbacks — when depicting Thanksgiving in Pittsburgh, for example. “There’s a small digital budget for removing palm trees,” he said. “I’ve painted grass before. I’ve painted it green and I’ve painted it brown, but [L.A.’s] Griffith Park will not let you touch their grass, so you just have to live with it. When that episode airs, I’m usually at a bar somewhere.”

As for what we can look forward to in Season 2, Ventimiglia said: “There’s a lot happening for all of the Pearsons. Jack and Rebecca need to get their marriage on track because it’s crumbled and fractured.”

Added Moore: “I think some of the answers people are looking for will be at least satisfied and satiated at the beginning of next season.”