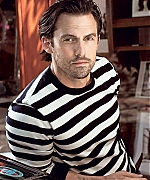 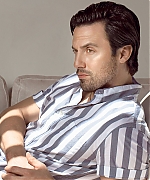 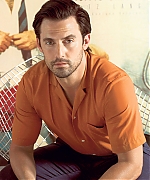 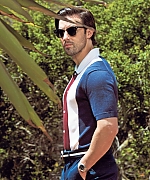 NY POST – This is the year Milo Ventimiglia became a dad — at least on TV.

The 39-year-old actor already enjoyed a reputation as a Hollywood heartthrob, playing younger parts like those of irresistibly brooding teen Jess Mariano on “Gilmore Girls” and empath Peter Petrelli on “Heroes.” But he finally got to act his age for the role of Jack Pearson, a father who — after the death of one of his newborn triplets — decides to adopt an orphaned baby on the premiere episode of NBC’s “This Is Us.”

“I wanted to play a good man,” Ventimiglia tells Alexa after our cover shoot, sitting on an outdoor patio in Los Angeles’ Benedict Canyon, as wind chimes ring in the background. “It was very simple how he loved his wife, how he loved his kids.”

That unabashed love helped “This Is Us” become network television’s biggest sensation in years. (Its trailer broke streaming records last May, four months before the show premiered.) The series leaps back and forth through time, showing the close-knit, interracial Pearson family at different ages while dangling a sobering fact before its besotted audience: Jack dies and his wife, Rebecca (Mandy Moore), remarries.

Ventimiglia, who has changed from his designer photoshoot threads into an effortlessly cool black T-shirt and jeans, knew he was playing a dead man when he signed on for the project (even if the particulars of his character’s death remain a mystery to viewers).

“I know how [Jack dies], I know when, I know why. It didn’t sway me at all. [Executive producer Dan] Fogelman said to me, ‘Milo, don’t worry. Just because Jack is dead in the present day doesn’t mean you’re going to be off the show.’ ”

Indeed, Ventimiglia remains a pivotal father figure both on-camera and off.

“He really feels like the true patriarch of our little set family,” she tells Alexa. “He knew every crew member’s name by the end of the first week of work and makes sure to say good morning and shake hands every time he walks on set.”

Though Ventimiglia has no kids of his own — he’s never even been a camp counselor — he displays an innate tenderness and ability to connect with the show’s child actors as well.

“You have to remember that they’re kids,” he says. “Nurture a fun environment for them, but don’t let them get away with too much. Show them kindness and love, intelligence and strength — they’re going to soak it all in.”

Spoken like a man who’s ready to become a dad himself?

“I’d love to have kids,” he says, before quickly adding a caveat. “I think it’s more about having that right partner. The older I got, the more I understood that Mom and Dad were going to have to be cool with Mom and Dad together, whether the kids were there or the kids were gone. I think for me the lesson was find a great partner — having kids will be the joy from having a great partnership.”

As for finding that partner, the actor has previously been linked with former co-stars Alexis Bledel and Hayden Panettiere. Lately, he’s been spotted with a new girlfriend, 31-year-old Stella McCartney marketing coordinator Kelly Egarian. But Ventimiglia remains mum on their relationship. “We won’t talk about it,” he says firmly.

If he sounds remarkably grounded when compared to some of his peers, credit his mother, Carol, and father, Peter — a Vietnam vet to whom Ventimiglia turned for inspiration for his character.

“I was never at a loss for hugs and kisses from my parents and my [two] sisters,” the actor reflects. “I think there’s this idea that the depth of an actor’s performance is built on tough times or horrible events or isolation, but I never found that. I figured that my imagination coupled with the story can get me anywhere.”

Growing up in the shadow of Disneyland, in Anaheim, Calif., also had a big influence. His mother worked there and he once tried to get a job “cleaning up trash on Main Street, but I couldn’t get hired,” he laughs.

Instead, he soaked up its creative spirit by visiting as often as possible. “As I got older it became a place to escape, for all of us teenagers to go run around the park. [It cost] 46 bucks to get in, but if you were from Southern California, they would cut you a deal.”

Ventimiglia keeps it local to this day, riding around LA and Orange County (where his parents still live) on a jet-black Harley-Davidson. “Here, I’m around all my constants. I see my parents. I see my close friends.”

He’ll also be seeing his “This Is Us” family when they reunite to film Season 2 in July (the show is set to return this fall on Tuesday nights).

Ventimiglia hasn’t seen any new scripts yet, but he’s talked with Fogelman about upcoming storylines. One thing they’ll likely address quickly is the controversial Season 1 finale. Viewers were led to believe they’d finally learn how Jack died — and when that revelation failed to come, they lashed out on social media. The outrage frustrates Ventimiglia.

“It bothered me that people were so wrapped up in wanting to know [about] Jack’s death,” he explains. “Whenever someone would say to me, ‘I was bummed I didn’t find out,’ I would say, ‘I’m disappointed you didn’t focus on his life.’ People are dissatisfied no matter what. If Jack dies: ‘Why did you kill him?’ If Jack lives: ‘Why didn’t you show us how he died?’ People just need to calm down … and understand that things are going to unfold as they’re supposed to unfold.”

The show’s success also means pressure to dive into the annual fame bath that is the Emmy Awards. Ventimiglia has been submitted for Best Actor in a Drama Series (along with his co-star Sterling K. Brown), but he’s not jumping on the campaign trail just yet.

“I’ve never been driven by the recognition of an award. I do the work because I enjoy the work,” Ventimiglia says. “Acting is very sacred. Anyone who stands in front of a crew with the camera recording their emotions is a brave individual. As humbling as it would be to be recognized, I’ve never needed that. I do the job the same.”

The 2017 Emmy nominations will be announced July 13, a few days after Ventimiglia’s 40th birthday. He hasn’t made special plans for that milestone, except — as always — to keep his focus on family.

“People close to me keep trying to plan things, but it makes me so uncomfortable,” he says. “I don’t like attention. My dad’s birthday is a month before mine. So we’re all going to be together for that.”

Emmys: ‘This Is Us’ Star Milo Ventimiglia Gets Misty Revisiting ‘The Pool’