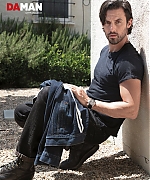 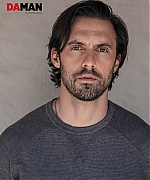 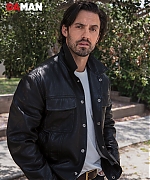 DA MAN – Looking back, American actor Milo Ventimiglia entered into the world of show business in what can only be described as one of the defining shows of 90s TV, Will Smith’s “The Fresh Prince of Bel-Air” back in 1995. Other than that, he was once best known for his work on “Gilmore Girls” where he took on the role of Jess Mariano, Rory Gilmore’s troubled love interest, then as the son of Sylvester Stallone in 2006’s Rocky Balboa and as Peter Petrelli in the sci-fi drama “Heroes.”

Nowadays, though, he’s known for his leading role as Jack Pearson opposite Mandy Moore on NBC’s hit drama series “This Is Us.” For his role as Jack Pearson, Ventimiglia has received three Primetime Emmy nominations for Outstanding Lead Actor in a Drama Series back in 2017 and 2018, as well as this year. And to top it all off, three new seasons of “This Is Us” has been confirmed, starting from 2019-2020 until the 2021-2022 season—which speaks volumes of the show’s success and the performance, not to mention the star power, of its leading performer. For more on Ventimiglia’s recent work and his upcoming projects, DAMAN sat down for a trans-continental chat.

DA MAN: Hi Milo, thanks for having us. How are you doing these days?
Milo Ventimiglia: I’m great, thank you very much.

DA: So, let’s talk about “This Is Us.” If we’re not mistaken, last year, the show scored 11 Emmy nominations. What was it like for you coming into this show?
MV: Working on an Emmy nominated show is just like working on any other show. You showed up, you got excited to be there. You work well with the crew, your writers, your casts, your pre and post-productions. You just remain present. At least that’s what I’ve done and I think as the show has going on and we stayed in the Emmy conversations, it actually makes me work even harder. Go even deeper into the characters, the stories, just kind of double down the material, not to stay in the conversation for awards, but just to do the good work.

DA: Speaking of which, NBC announced that “This Is Us” would be renewed for a fourth season. The network has also confirmed a fifth and sixth season going all the way until 2020. How do you feel about this development?
MV: I’m very excited about the three seasons pick up. I think that’s a great thing for the audience. I think it’s good that we are able to let them know that they can committed to us, that we’re going to tell more stories and get through more stories, and we’ll be around for a little while. I think that this will also let the audience know that we have an end plan, or end game, and we’re not just telling random stories, but it’s all directed into one path. And I’m looking forward to it.

DA: By the way, after three seasons, do you still remember what it was that first drew you to audition for “This Is Us”?
MV: It was just a great script. You know, I read it first as an audience member and then I found love with the story. Beautiful story about family, and then also individually, about this man who so deeply wanted this, to build this family. So, it was just really that first read of the script that really pulled me in.