Milo is featured on the cover of Haute Living! He looks so handsome, as always! You can check out the cover and photoshoot in our gallery and read the interview below! 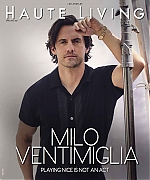 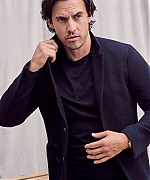 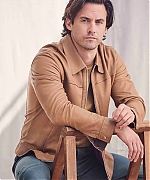 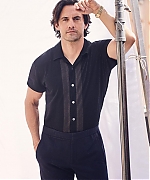 NOT MANY PEOPLE would dare to take an Airstream up to 90 miles an hour, but Milo Ventimiglia, believe it or not, has always had a bad-boy side. Still, the truth behind his need for speed is much more Milo the man and less, perhaps, the rebel many used to make him out to be. He tested the limits of his 55 mph chrome caravan because he was hell-bent on getting to work on time. And that, too, is badass, though perhaps not in the conventional way. Which is okay, because conventional Milo Ventimiglia is very much not.

Fans typically correlate him with one of two roles: Jess Mariano, Gilmore Girls’ rebel without a cause, or, more often these days, his current small-screen character, Jack Pearson, the flawed but fantastic dad of three on NBC’s This Is Us. The truth? He’s somewhere in between.
The Milo Ventimiglia of today, a man on the brink of turning 44, toes the line between these two amalgamations. He has a thing for Harleys and favors leather jackets like Jess; like Jack, he is kind, responsible and paternal — an intriguing trait for a perpetual bachelor. Call it the best of both worlds.

But let me backpedal here and set the scene for how Ventimiglia came to be speeding across the U.S. of A. in his big silver bullet. Last spring, he was about to start filming Evel, a limited series about daredevil Evel Knievel, in New Mexico. His transformation was complete: a lush, dyed-blond mane, blue contact lenses, a waddle, thatches of tufty chest hair. He learned to do wheelies on vintage motorcycles; no hardship, pure fun. And then, on March 13, two days before production commenced, Covid-19 shut it (along with the rest of Hollywood) all down.

After hearing about the panic and the toilet paper wars back home in Los Angeles, he opted to stay in Albuquerque for three months. His rented house was already paid for, so why not? He hunkered down and chilled out. With Hollywood still shuttered months later, realization dawned that the road trip he had been attempting to take for the better part of three years, the one he never seemed to have enough time for, could finally happen. So he took a Covid test, headed to his hometown of Anaheim, Calif. — which also happens to be the home of Disneyland and Great Adventure (so fitting) — to give his mom and dad a hug and made tracks.

“There was no obligation to be on set, which meant that I could be anywhere,” he explains to me over Zoom in March. “So I said, ‘You know, I’m just going to go on the road for a little bit.’”

That “little bit” turned into a 10,000-mile adventure: a pitstop in Utah to visit one sister, a journey to Oregon (where he also owns a home) to see the other, some camping in between and the purchase of his hot new ride (that Airstream) — which, though it sounds so “f—ing chic and cool,” was a pretty big departure from a Harley, his transportation of choice. (And it was definitely preferable to that one time in the past year that he took a flight, double-masked, shield up, hoodie pulled tight, looking like some kind of “weird video game character.”)

‘This Is Us’ Ending With Season 6

1 Comment to "Milo for April/May Cover of Haute Living"